Las Madres de Plaza de Mayo (The Mothers of May Square) continued to gather with the same enthusiasm every Thursday at 3.30pm in the May Square, Buenos Aires. 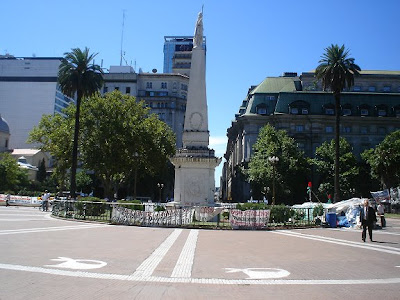 Your paper is intriguing and I look forward to further posts. I was wondering if your use of collective memory is descriptive- as in, the collected memory of currently living beings, or if it also has Jungian applications.

As one of those lucky Americans who has escaped any form of institutionalized violence or condemnation, I can only intellectually grasp the complexity of such situations as you describe. However, there is a deep emotional horror and sorrow that the world is this way. Some nights I wake up thinking "somewhere there is someone in horrible pain" and it is as if I were experiencing it. This is a good example to me of a Jungian sort of collective consciousness. I often wonder if somewhere, some twisted person wakes up in the middle of the night and thinks about torturing someone.

The idea that movies and reality often cross over to create memory is very powerful and has many applications. It makes me wonder if my current Government/Hollywood complex isn't doing this intentionally. It is hard to resisit the notion that Americans are being manipulated for just this purpose. At some point we will all be so "plugged in" and so removed from the facts of life that we will have little actual experiences to remember.

This makes me wonder- what is a historical fact? If a government can create statistics that show we are not in a depression- though many people experience it as such while some are doing better than ever- then which is the real memory? does it become an issue of more people agree than disagree with one perspective or the other?

What is memory? What is fact?

Perhaps I missed it and you defined it in your blog. If so, I apologize../

Conspiracy theory aside. I do have a question. A friend of mine, who is black, has a large part of her identity invested in the fact that her ancestors were slaves. It is important for her to remind people of color of their collective experience because it worries her that they are forgetting. I am torn. On the one hand, forgetting is a sign of the issue being no longer relevant. On the other, forgetting is a sign that the issue has gone underground and so represents a danger that may resurface in some nastier form at some later date.

\
What is the role/effect of forgetting in your model?

I think you are working on something very important and incredibly relevant to todays mass media induced terrorist fantasy complex. It is also scary because I know that many ideas that were developed to help humanity are often used to enslave and to destroy the better aspects of our species.

Many thanks for your comments. I'll do my best to answer some of your questions. First, It should bear in mind that memory is always a reconstruction of past which takes place in the current situation. This reconstruction is usually guided by some kind of mental model based on many features such as a mental representation of the context, knowledge, emotions, setting, participants and so on. Many times this narrative can be estrategically constructed for the current situation according to our goals, interests, attitudes, etc. That's why the notion of 'social situatedness' plays a crucial role in the whole process. For this reason people have the ability to construct different life stories depending on their mental respresentation of the situation, goals and so on. As we normally went through different experiences in our life course we tend to build different memories of the same episode. I mean, we can both underwent the same situation but we remember different things. And of course, nobody will be saying lies. The notion of coherence should also be taken into account because many times external stimuli are fragmentary and the brain is responsabile for 'filling the blanks'. Second, I'd like to say a few a words regarding the difference between 'collective memmory' and 'collected memory'.
Some scholars tend to believe that collective memory is mainly grounded in public representations of the past, such as memorials, films, etc. On the other hand, you can find people who think that collective memory can be defined as the sum of different autobiographical memories of the same episode. Nowadays, you will find integrated approaches to collective memory which try to conbine and integrate this 'memory in the world' and the 'memory in the mind'. Collective memory can be thought as a process based on the propagation and interaction of both kinds. Third, there is a distinction between collective memory and historical facts. For historical facts I mean a version of the past which for some reason (power, etc.) gained the status of 'truth knowledge of the past'. If we are dealing with social issues, it's quite difficult to claim that 'the truth is out there' and not estrategically constructed. There is an american antrophologist called James Wertsch (2002) who makes a clear distinction between history and collective memory. He argues that collective memory belongs to an identity project which often displays a picture of heroism, victimhood, etc in detriment to collective knowledge of the past which aspires to arrive at objective truth, regardless of the consequences. Then he adds taht collective memory is usually impatient with ambiguity, ignoring counterevidence in order to preserve the established narrative to maintain group cohesion as opposed to collective knowledge of the past which generally recognises complexity and ambiguity revising existing narratives in light of new evidence. I believe, this is why collective memory is often controversial. But it should be pointed out that collective memory is much more than talking about a shared past. This shared past needs to be relevant for the self and his/her community.
So far, I haven't thought about the role of forgetting in this model of collective memory. But grear thanks for remind me about this because your question can be one of those I will probably have to answer.