A couple of months ago, I received a letter by email written by a grandmother who has been looking for her granddaughter since 1977. Her granddaughter is one of the hundreds of children kidnapped by the perpetrators of the military dictatorship. Relatives of the victims uncovered evidence that some children taken from their mothers soon after birth were being used as the adopted children of military men.
Since 1977, the Grandmothers of the Plaza de Mayo (Abuelas de Plaza de Mayo), have been
demanding the return of these kidnapped children. So far, only 77 have been located.

The letter below has been sent to thousands of people on the internet. It is clear that, in cases of this sort, we can see how individual memories are being used to shape the collective memory of the dictatorship. 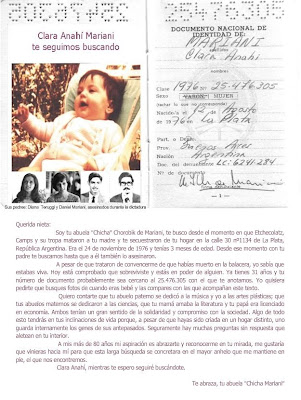 I am your grandmother “Chiche” Chorobik de Mariani. I’ve been looking for you since Echecolatz, Camps and their troops killed your mother. They kidnapped you from your home located on 30th street nº 1134, La Plata, Argentina. This event took place on November 24th, 1976. You were only 3 months old. From that moment, your father and I searched for you until he was also assassinated.

Despite the fact that they tried to persuade me by saying that you were found dead during the shooting, I knew that you were alive. Today, it has been proved that you survived and that someone has been taking care of you since that day. You are 31 years old and your national ID number should be 25.476.305. When you were born that was the number you had. I would like to ask you to look for photos of you when you were a baby and to compare them with those attached to this letter.

I want to tell you that your paternal grandfather was a musician and I became a plastic artist. Your maternal grandparents were scientists; your mother loved literature and your father was an economist. Both had a great sense of solidarity and they were very socially engaged. Despite the fact that you were brought up by another family, some of these features will probably have a strong influence on you when you have to make major decisions in life. Genes always play a central role in what we are. You will probably have lots of questions needing answers. This might make you feel uncomfortable.

I am a woman in my eighties whose aspiration is to hold you tight and see myself in your eyes. I would love you to come to me in order to make this search reality. The desire to meet you is my greatest wish and it keeps me alive.

Clara Anahí, in the meantime, while I wait, I will keep looking for you.

Your grandmother “Chicha Mariana” hugs you. 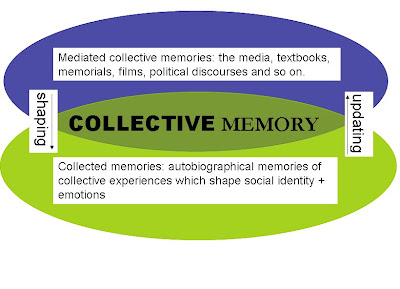