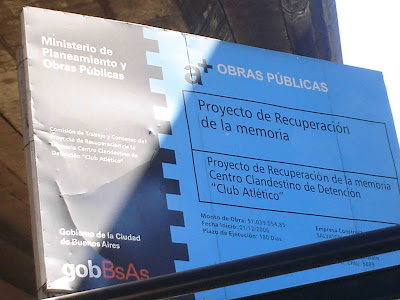 The detention and torture centre had two sections of cells, located across from each other and separated by a very narrow aisle. The centre also had three torture chambers, bathrooms, and infirmary, a guardroom and three individual cells. The centre had the capacity to detain 200 people at any given time during its existence, housed between 1,500 and 1,800 people. This information is deduced from the testimonies and the identification codes given to the detainees at the time of being taken to the torture and detention centre. At the end of the 1970’s the building was demolished for the construction of the motorway 25 de Mayo.

In , the Government of the City of began excavating the sight, marking the first time that urban archeological excavation had been undertaken with the goal of insuring that the criminal acts committed by the state during the dictatorship never be forgotten. This initiative had come from a group of survivors of the centre and also from human rights organizations. In 2003, after the presidential election of Nestor Kirchner (2003-2007), the Mayor of the City of enacted an order in council that created the program for memory recovering of the clandestine detention and torture centre “Club Atletico”. 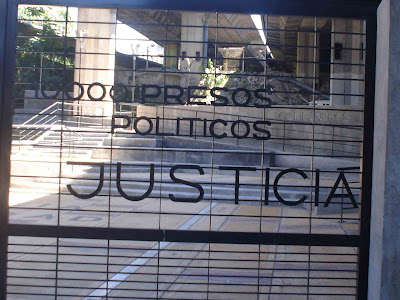 Since I read your paper, I have been thinking about cemetaries and how I love to visit them. All those people, each with a life full of stories, drama, pain, joy and without a doubt hours of boredom and sorrow. One never imagines how many horrors these dead people may have experienced in their lifetime because the memorials are all so buccolic and hopeful of a soul at peace in the afterworld.

I have been comparing the feeling I have going to a cemetary with the experiences of visiting the National Holocaust Museum in Washington DC and the Ground Zero Museum and park at Hiroshima (one of the most peace oriented war sites I have ever seen- it is a beuatiful and tragic experience to go there).

The museum in DC is brilliantly designed to walk you through the experience of what it must have been like to be a Jew at that time. How easy it is to just try to be a good person and to do what you are told so as to stay under the radar and out of trouble. By the time they walk you into the gas chamber, you feel like a brainless mass of numbness- even though you are not hungry, beaten, scared or ill. I hope you get a chance to visit it.

In contrast, the Hiroshima museum is all about looking ahead in forgiveness and unity. You end the "tour" in an all white room of classic Zen peacefulness. There is no sense of anything anti-american. A big relief for an American! The message is: It happened, it was horrible, it is sad, it needs to never happen again. Very cool and much more moving in that I came from there with hope whereas I came from the Holocaust museum aware of how very easy it would be for it to happen again. An awareness that has made me view the last 8 years with concern- but helplessness.

I guess the difference between my experience of each of these memorials to those who have died can be summed up as one that is manipulated by the surroundings.

Death and pain is such a normal part of life- I see that as a farmer. Things die, you cry and then you shift your focus to those that are still alive. Maybe a part of the problem with Purges, Holocausts, genocides and wars is that in the midst of it, so many people are thinking: This sucks, I am suffering but I am glad I am not that other person. I have to take care of me and my own, so I will walk by and not look."

So in looking at the Club Atletico (which is an unfortunate name with it's Party place association in America) it makes me wonder. What would a message be that would make people understand (as the Holocaust Museum), forgive and prevent (Hiroshima), find peace in a past (cemetaries) yet change the way people survive (bystander effect as I have described it)?

It is difficult for me, as I am far away, to know if the survivors wish only for recognition and retribution, or if they have a larger message. Do they and if so what is it?

Your page on textbooks set me to thinking as well about how all of the above could help children viscerally deal with death/torture with out desensitizing them so that they would be willing to go out of their comfort zone to prevent it from happening or to do something about it at the time.

Sorry you can't come over for dinner (with our home grown beef and lamb- veges for Ola) so we could discuss this. Someday.
Renee Vaughn