The pragmatic and personal representation of the social and material environment coordinates and synchronizes situation models, as well as cultural models in communicative interactions, conceived as cooperative actions. In order to meaningfully proceed in social cooperation and interpersonal communication, speakers need to take for granted that, to some extent, their representations are shared with their addresses (Givón, 2005; Tomasello, 2008). In communicative interactions, the sensation that we share goal specific and relevant situation models with our addresses relies on our subjective and unique representation of the context in which the interaction unfolds. These unique representations of the communicative interaction are defined as context models (van Dijk, 2008, 2009). The speaker’s context models include a representation of the mind of the interlocutor that may shift constantly from one utterance to the next during live communication. This cognitive and discursive process allows us to make strategic hypotheses about what our addressee knows. A language user’s context models are not only about his/her interlocutor’s epistemic (knowledge) and deontic states (intentions). Rather, they are constituted by the interplay of the following schematic categories: setting (time and place), current action and participants with their social and cognitive proprieties such as identities, goals and knowledge (van Dijk, 2008). These elements determine how we communicate the reconstructed and updated experiences in situation models. Here is a brief description of the schematic categories which constitute context models of the situation described above: 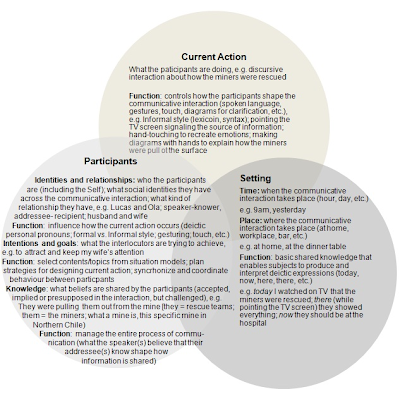