Where: Faculty of Arts and Philosophy, University of Ghent

Whereas race, gender, and class were foci of earlier waves of scholarship, in the course of the 1980s memory emerged as an urgent topic of debate in the humanities. By now a great deal of research has been devoted to “cultural memory,” a term coined by Jan Assmann which highlights the role of culture in the formation and transmission of collective memories. However, it has been observed that memory studies is “more practiced than theorized,” and practiced, moreover, within “an array of different disciplines and national academic cultures, with their own vocabularies, methods, and traditions.” Cultural memory studies is a blooming but as yet incoherent and dispersed field, characterized by a host of different terminologies rather than a common, generally-agreed-upon conceptual foundation. This seminar will help doctoral researchers from various disciplinary backgrounds strengthen the methodological and theoretical underpinnings of their PhD projects, refine their research questions, and gain further insight into current trends and future directions in scholarship about the intersections of memory and culture. It will serve as an interactive forum in which junior and senior memory scholars present and respond to one another’s research and reflect on new developments in the field.

A central role in the seminar will be played by Andreas Huyssen, who will respond to the doctoral presentations, deliver a keynote lecture, and participate in a roundtable discussion. Huyssen is the Villard Professor of German and Comparative Literature at Columbia University, where he served as founding director of the Center for Comparative Literature and Society and as chair of the Department of Germanic Languages. His research and teaching focus on eighteenth-to-twentieth-century German literature and culture, international modernism, Frankfurt School critical theory, postmodernism, urban culture and globalization, and cultural memory of historical trauma in transnational contexts. His latest project considers the overlaps and tensions between the contemporary discourses of memory and human rights. While Huyssen has distinguished himself in many domains, he has been invited for this event in his capacity as an indisputable authority in cultural memory studies. The author of genuinely seminal and influential publications such as Twilight Memories: Marking Time in a Culture of Amnesia (Routledge, 1995) and Present Pasts: Urban Palimpsests and the Politics of Memory (Stanford UP, 2003), Huyssen has had, and continues to have, a tremendous impact on this field of study. 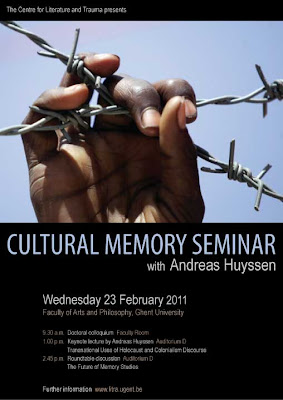 Members of the Doctoral School of Arts, Law, and Humanities can gain credits for the doctoral training programme (transferable skills training, cluster research and valorization) by participating in this event.