New Project: Autobiographical memory, emotions and war: the narrative construction of the self in context and history

(This project has been put on hold, I hope I will get some funds to make it real one day)
The point of departure of the project is the assumption that autobiographical memories are always, to a greater from a lesser extent, embedded in society, culture and history. This sense of living in history is what connects people past experiences with the larger social milieu and makes them much more meaningful. This project seeks to comparatively explore, at intergenerational and international level (, and Malvinas/Falkland Islands), the autobiographical memories and emotions of average people about the actors, actions, and events involved in the Malvinas/Falklands War. For the most part this remains an understudied relationship in the interdisciplinary field of memory and emotion studies. It is assumed that a struggle between rival master narratives of the war underlies the struggle about the discursive construction of memories and emotions.

The aims of this project are: firstly, to explore the ways in which the self, embedded in the experience of the Malvinas/Falklands War in London, Buenos Aires and Port Stanley (Malvinas/Falkland Islands) is cognitively, emotionally and discursively constructed in real world settings at intergenerational and international level; and secondly, to show the ways in which context models sustain a coherent and consistent self-positioning in naturalistic settings and are the key to understanding how autobiographical memories, narrative schemata and emotional codes are interconnected and realized in self-narratives. 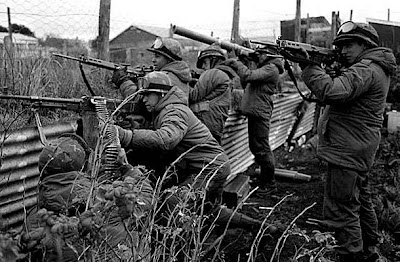 The aims of this project are focused on answering the following questions: a) How is the self embedded in the experience of the Malvinas/Falkland War narratively constructed in everyday interactions?; b) What cultural and generational differences can be seen in the manner in which actors (including the self), actions and events of the Malvinas/Falklands War are represented? Are these cultural and generational differences based on the influence exerted by distinct cultural models? If there are, how are they communicated?; c) How are the autobiographical narratives modelled by subjective context models?; d) What are the emotions shaping these autobiographical narratives? How are they narratively constructed and communicated? Are these emotions associated with emotional codes that are culturally shared (e.g. in national, generational terms)? If yes, how are they interwoven?; e) What is the pragmatic role of telling an autobiographical narrative about the one’s self-experience within the Malvinas/Falklands War in interactional terms (complaining, justifying, blaming, rejecting, etc.)?; f) How are autobiographical memories, narrative schemata and emotional codes interanimated in practices of autobiographical storytelling linked to political events (e.g. Malvinas/Falkland War)? Are there differences at generational and national levels? If there are, what strategies are used to interactionally construct them?; and g) How can a political event affect not only a person’s life story in general, but also the autobiographical memories in particular, of ‘ordinary’ people according to their physical location (, , ) during the political conflict?