Study shows that memory centers on personal life, not history

The experiment was conducted in two parts and included participants from ten cities around the world. First, the participants were shown a list of words and had to write down personal memories associated with those words (e.g., when they learned to ride a bike or when they were by a river). Next, they thought aloud as they remembered when those personal events occurred. The participants were tape-recorded during this part of the experiment and the researchers analyzed the recordings to see how often public events were mentioned.

The results, reported in Psychological Science, a journal of the Association for Psychological Science, show that "historically-defined autobiographical periods" (H-DAPs; e.g., "during the war") do exist, although H-DAP formation depends on the intensity, duration, and novelty of the public event, as well as how close it is to a population. 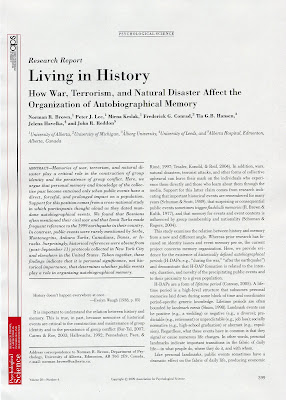 Surprisingly, Israeli participants did not use H-DAP references to date their memories. The researchers note that "this lack of H-DAPs reflects the chronic nature of the conflict that afflicts the region." They surmise that "in Israel, group conflict is a fact of life, and psychological, social, and physical responses to this fact are part of the daily routine."

H-DAPs were also absent from (post-9/11) protocols collected in New York City and elsewhere in the U.S. The authors speculate that the 9/11 references were missing from the US samples because the attacks had, at most, a limited effect on the lives of most Americans — it is true that things changed after 9/11, it's not true that "9/11 changed everything."

These findings suggest that public events can be categorized as "emotionally charged" (e.g., the September 11 attacks), which affect people's emotions, attitudes, and beliefs or "epoch-defining" (e.g., the Siege of Sarajevo), which change the way people live. The results of this study indicate that it is epoch-defining public events — those with personal significance, and not necessarily historical importance — that cause personal memory and history to become entwined, leading to the formation of H-DAPs and causing us to "live-in-history."