The focus group is a simulation of reality. It is a conversational process linked to reality for a joint action that takes place here and now (Ibanez, 1979). By means of this simulation the group recreates collective experiences, memories, emotions and desires focused on a series of topics under relatively controlled conditions. These topics were intentionally selected and then suggested by the researcher according to his goals and interests.

The communicative device of the focus group relies on a micro-situation of a social macro-situation (, 2006, Potter & Puchta, 2004), which means that it functions as a mirror of a prevailing social situation. Groups are not a mere research tool in order to draw conclusions about how a social group (e.g. women aged between thirty and forty) perceive and understand major social issues. Instead, they should be thought of as a conversational mechanism designed to push knowledge forward regarding the way that the particular group, as a portion of society, frames a certain social issue.

The dynamic of the group is sustained by the discursive interaction conceived as a cooperative action (, 2006). This interaction is given simultaneously with a continued elaboration and negotiation of the shared meanings of its statements in a dialogic process. Its logic is grounded in a socialized discussion where its members are continuously seeking shared viewpoints by means of agreements and negotiations. The focus group does not omit questions and answers. In turn, the whole discourse that emerges will appear as a consequence of an initial stimulus which functions as a trigger in the dynamic. In other words, through an explicit provocation by the researcher, the topic is proposed. Hence, the whole interaction will be controlled by him but he will never impose, allowing the participants to discuss, elaborate and encounter shared meanings among each other. 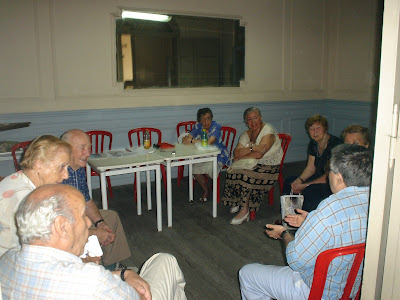 This focus group was made up of 8 participants between 70 and 80 years of age.
It was conducted in February 2008 at a retirement centre in the city of Buenos Aires.

Email ThisBlogThis!Share to TwitterShare to FacebookShare to Pinterest
Labels: Methodology