In my last two visits to I found several memorials spread throughout the city. These memorials were built by relatives and friends to remember their loved ones murdered as a consequence of military and police repression. They are located in the same places where these persons were kidnapped by the Armed Forces during the military dictatorship or shot dead by the police during the riots on December 19 and .

It’s interesting to point out that these memorials were built by individuals as acts of commemoration. But as they become part of the urban geography they operate shaping memories of thousands of people who pass by these sites of remembrance in . They transform the urban landscape which we usually interact with. In doing so, they may affect the manner we remember these historical events in present. 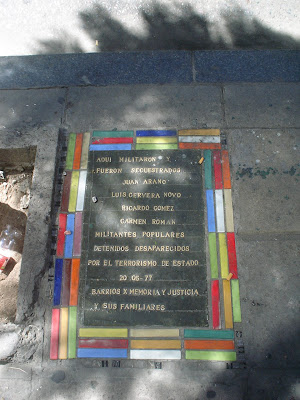 Here were kidnapped active politcal members. Juan Arano, Luis Cervera Novo, Ricardo Gomez and Carmen Roman were persons socially engaged. They were ‘disappeared-detainee’ by the terrorism of state on .

Neighborhoods for memory and justice and their relatives.


The following picture shows us the way in which cultural technologies utilized to remember the victims of the dictatorship are still being used to commemorate the death of loved ones under different circumstances. What links both acts of remembering is the fact that these people were murdered by the state embodied in its own army and security forces. 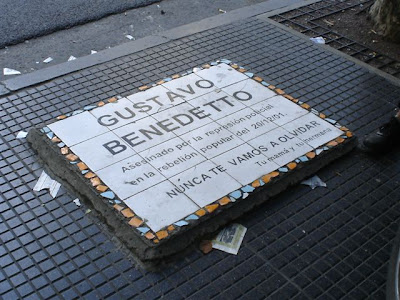 Gustavo Benedetto murdered by the police repression in the popular rebellion on . We will never forget you. Your mother and sister.

It should be kept in mind that both memorials function creating and reproducing social identities. These identities are largely grounded in a narrative of the past which aims to condemn responsible for crimes as a manner of reparative justice.

Comments are very welcome! Thanks very much.