Textbooks allow for a certain perspective over reality as they have an institutional nature. Furthermore, the reader they address is a reader that has no education and thus has no strategies to question the information given. 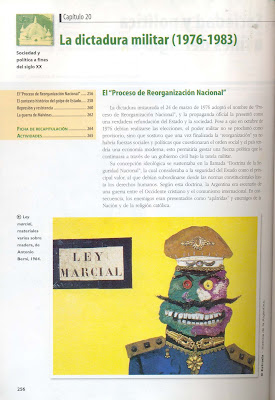 Behind the scientific objectivity and a clear way of presenting scientific knowledge, textbooks convey underlaying ideological contents which presuppose certain conceptions of the world, to the detriment of others. These conceptions are not only utilized to explain how the world is now, but also to provide reasons regarding the causes of current social processes. Textbooks can be thought of as cultural tools which are used to reproduce and convey legitimated knowledge. Those conveyed representations might be ideologically biased. They make a strong contribution to the process of negative stereotyping, which usually functions as the basis of prejudices towards others. That is to say, textbooks produce a significant influence on the way that children perceive reality. 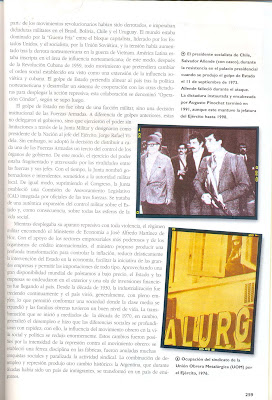 The way in which textbooks presented the last Argentine dictatorship throughout the last 30 years was heavily influenced through the politics of memory promoted by the different democratic governments. These administrations moved from a policy of total omission of any condemnation of the human rights abuses, to an open acceptance and promotion of them. The ways in presenting the dictatorship in textbooks exposed a wide range of nuances, however most of the time, they were in accordance with the public accounts held by the governments and media. Therefore, textbooks have been shaping the understanding of the experience of the dictatorship among both, people born during the regime, as well as years after. That is why, former post dictatorial generations understood the experience as a war, in contrast, current generations have been starting to think about the episode by means of a genocide framework.
Posted by Lucas Bietti at 09:25