New publication: The commemoration of March 24th, 1976: Understanding the exceptionality of the present political discourse about the “Dirty War” in Argentina 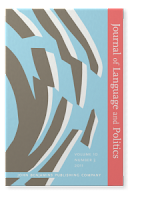 Abstract
In December 2001, Argentina underwent the worst socio-economic crisis in its history. Strong criticisms were raised by society against almost all the social injustices encouraged by the policies promoted by the former governments. Forgiveness of the crimes committed by the dictatorship during the “Dirty War” which took place in the late 70’s, and reconciliation between the members of the dictatorship and society, was the position held by the post-dictatorship governments. However, the official discourse has radically changed since 2003, because of the administration of elected president Nestor Kirchner (2003–2007). The aim of this paper is to explore some of the changes in relation to the creation of two time-frames (TF1/TF2) to represent actors from the past and the present, and reinforce the current exceptionality of Néstor Kirchner’s political stance. To do this, I will analyse four political speeches given by ex- president Néstor Kirchner to commemorate the anniversary of the coup d’état of March 24th, 1976, the date which marks the beginning of the 1976–1983 military dictatorship.
Keywords: Argentina, collective memory, dictatorship, discursive strategies, Néstor Kirchner, time-frames