Death, Commemoration and Memory: an Exploration of Representation, Concept and Change

Call for Papers: Death, Commemoration and Memory: an Exploration of Representation, Concept and Change

The Death, Commemoration and Memory (DCM) Research Group is based within the of , Culture and Environment at the . Founded in 2008, DCM provides a forum for postgraduates and staff whose research engages with any aspect of the Group’s remit, attracting junior and senior scholars from a variety of academic disciplines. Building upon the Group’s success, a two‐day conference is planned in for June 2010 to provide a platform for further interdisciplinary discussion and to create new networks between researchers across the world.

Topics for discussion may include, but are not limited to:

- The social aspects of individual memory, collective memories and cultural attitudes towards memory

- The ethics and etiquette of death studies: the treatment of human remains in archaeology, pathology and museum practice

- Death in the visual arts: commemoration through architectural and artistic practices

- The dichotomy between history and memory

- Psychological and sociological studies of bereavement

We welcome abstracts of 300 words on any aspect of the conference’s themes, accompanied by a short academic resume of 200 words maximum. Applications should be sent to dcm.ed@hotmail.co.uk with ‘DCM CONFERENCE’ as the email’s subject. Submission deadline: 12 March 2010. 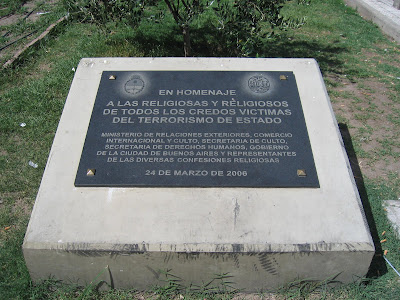 In memory of all members of any religious order who were victims of
state terrorism. Buenos Aires.
Posted by Lucas Bietti at 07:54