Cromagnon was a nightclub located in the neigbourhood of Once, in the City of . Cromagnon was tragically known because of massive fire that began the night of when a rock band called Callejeros was playing. The fire caused the worst unnatural tragedy in . 194 died and more than 1400 were injured due to the fire.

Now, the question is, what is the relation between this tragedy and memory? Since relatives and friends of the victims have been working together to bring that traumatic past into the present. Their goal is searching for justice for the death of their loves ones. In doing so, they have been carrying out a large campaign which includes massive demonstrations at the City Council, and an important presence in the press. Relatives and friends of the victims inaugurated their own Plaza de la Memoria () next to the nightclub. They created different websites not only as a manner to commemorate their children and friends but also as a free-access mechanism for the vast society to follow the judicial case and support their struggle for justice.

Website run by the relatives of the victims Que no se repita (Don’t let it happen again). It has its own newsletter:

Website run by the father of one of the survivors:

On August 19th, an oral tribunal in sentenced the former owner of the nightclub to 20 years in jail. However, the relatives and friends of the victims don’t seem to be satisfied with the verdict. They argue that there were more parties involved that were responsible for the death of their loves ones.

What strikes me more, are the similarities in the ways of commemoration by the relatives and friends of the victims who died in Cromagnon than what has been done to remember and/or commemorate the victims of the horror of the 1976-1983 military dictatorship.

In both cases, processes of remembrance and commemoration are mediated and performed by massive demonstrations, memorials, large presence in the press, and even a Plaza de la Memoria (). They also share the same ultimate goal: the search for justice.

So, in the case of Cromagnon, we are able to find that the relation between memory, justice and truth (installed as the main reason to commemorate the victims of the dictatorship) is operating as a social framework shaping acts of commemoration and remembrance. Just let me show you a clear example that makes much more evident the similarities in forms of commemoration performed to remember both traumatic events: 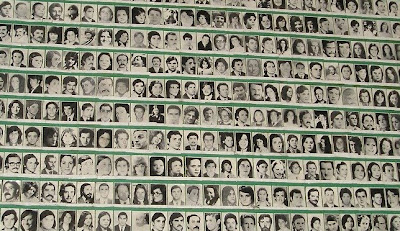 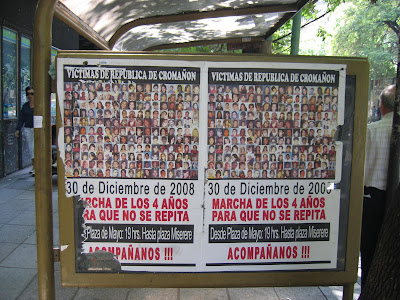 faces of the victims of Cromagnon

It would be interesting to explore and compare in detail some of the commemorative practices carried out by the relatives of the victims from both traumatic experiences.

The example makes clear that the social frameworks created by ways of remembering and commemorating the 1976-1983 military dictatorship are strongly influencing the manners in which Argentines understand new traumatic experiences. Now we should ask ourselves what are the underlying mechanisms modeling commemorative practices in ? What is their origin? And can we say that military dictatorship is operating in the social imagery as a metaphor determining practices of remembrance for new ‘tragedies’?