Not only are the government and the relatives of the disappeared people in the position to transform the urban landscape to commemorate the victims of the military regime. The relatives of the military killed by the violent actions carried out by members of political armed-organizations are also in the position to do so. The streets of seem to be a natural lab in which different representations of the traumatic past try to occupy (and monopolize) the public landscape. Sometimes these representations of the dictatorship can be thought of as real collective memories in conflict. 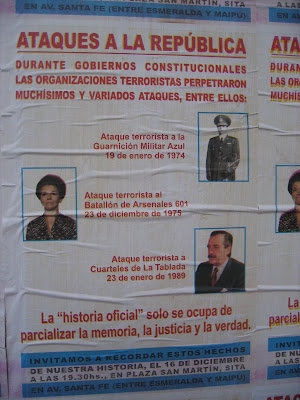 Attacks against the Republic

The ‘official history’ only sees to bias memory, justice and truth. We invite you to remember these events of our history...

The supporters of the military regime have their own ‘collective memories’ of the period of dictatorship and the political violence. The poster above is a vivid example of such collective memories. As no one could argue that those shared representations are less accurate than those conveyed by the victims of the dictatorship, they need to be treated as real memories as well. But these memories don’t promote the retrospective justice sought by human rights organizations, the government and the victims.

Now the question is, is memory enough for truth and justice?