Green Ford Falcons were driven by death squads during the period of dictatorship. Even today this car is still associated with the military regime. Paradoxically, Ford Falcon was the best selling car in Argentina's history. 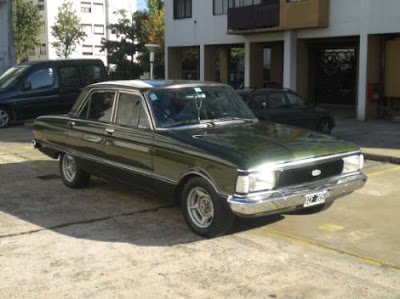 In a focus group I conducted in Buenos Aires in February 2008, Alejandro (born in 1967) remembers seeing green Ford Falcons close to his primary school.

PROGRESS REPORTAlejandro: Talking about going round, I remember the green Ford Falcons going round…watching over the school, and at that time the school was where we were told about not picking up things and that we were sort of being watched all the time…I never verified, but it was even mentioned that someone who worked…it was a full-day schooland there was a woman who worked in the kitchen, an unpleasant woman and once they said “they took her away because they discovered a weapons arsenal in her house”, at that time my thought was like… she was an unpleasant woman, I really wouldn’t be surprised but…I remember that, seeing the green Ford Falcons, at that time I was aware of what that car meant…I am talking about, I don’t know, maybe fifth grade.
PROGRESS REPORTPROGRESS REPORT

Alejandro conveys some of his autobiographical memories from childhood in relation to what was told before. He introduces a new element the green Falcons going around… watching over school. The object of memory the green Falcons triggers a political inference anchored in the following shared knowledge: green Falcons were used by death squads during the dictatorship. Alejandro claims that to some extent he knew what was going on at that time I was aware of what that car meant....

What this example shows is that remembering is something which occurs in a world of things, as well as words, and that artefacts play a central role in the memories of cultures and individuals (Radly, 1990 p.57).

I would like you to write more about it. Do you have any memories of this cars? Does your whole generation have this kind of memories? Did anyone else, in these times, own green falcons?
Interesting post :)

first of all, you have the wrong car
the military used a 1973-1977 ford falcon,if your taking about 1978 would have been with single round lights standard(taxi-police cars)
i lived during the military junta in Argentina, my dad owned a brand new single headlight1978 ford falcon,
and today as crazy it sounds building a 1973 ford falcon,in boca raton florida my memory of the car are all good,

first of all ,you have the wrong car,
u have a 1978-1980 falcon,the military used 1973-1977,and if you taking about 1978, i would have been
the standard model(single round light)lived in Argentina,during the military junta,hate to brake up your Argentinian urban myth , at least show the correct car,and yes, i am building 1973 falcon in Miami florida,not all memories are bad,for me the falcon brings good memories

To Olga
Yes, the entire generation can't forget about the Green Ford Falcons and what it meant if you saw one parked in front of your neighbor house, or one parked in front of your house. This meant probably you wouldn't see (little chance if you looked for them right away you would be told where the person was since probably they wouldn't aknowledge in some cases they had anything to do with the dissapearance of the person in question) those taken ever again.
Also I agree with tango1 that the model looked different. It was not as high and but longer. The one in the picture actually looks bulkier.

This is the large web site that thousand of service and owner manual collection. I loved that ford Falcon XR8 manual download URL.